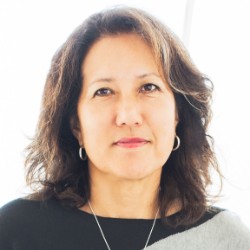 Paula Daniels
Center for Good Food Purchasing
Los Angeles, California
Paula Daniels is Co- founder, Chief of What’s Next, and Chair of the Board of the Center for Good Food Purchasing, founded in July of 2015 as a national spin off from the Los Angeles Food Policy Council, which Paula founded in 2011, to advance the nationally-networked adoption and implementation of the Good Food Purchasing Program by major institutions. The program has received national and international acclaim, including the 2018 Future Policy Award for Scaling Up Agroecology, from the United Nations Food and Agriculture Organization, the World Future Council, and IFOAM Organics International.

Paula is an experienced private sector attorney who transitioned to public policy and served in several senior level positions as a government official, including: Senior Advisor, Mayor Villaraigosa of Los Angeles; Commissioner, Los Angeles Department of Public Works; Commissioner, California Water Commission; Board, California Bay-Delta Authority; Commissioner, California Coastal Commission.
Her leadership in food and water policy has received recognition through numerous academic appointments and other awards. Some recent examples: 2018, Ashoka Fellowship; September 2016, Resident Fellow of the Bellagio Center of the Rockefeller Foundation; 2015, Pritzker Environment and Sustainability Education Fellow at the UCLA Institute of the Environment and Sustainability; 2013, Lee Chair in Real Estate Law and Urban Planning at the College of Environmental Design, UC Berkeley; 2012-2013, Stanton Fellowship (awarded by the Durfee Foundation). She has been adjunct faculty at UCLA since 2010 and has also had academic appointments at USC and Vermont Law School.
environmentally regenerative
fair to labor
respectful to all
supportive of local economies
promotes public health
Contact Us
Email Us